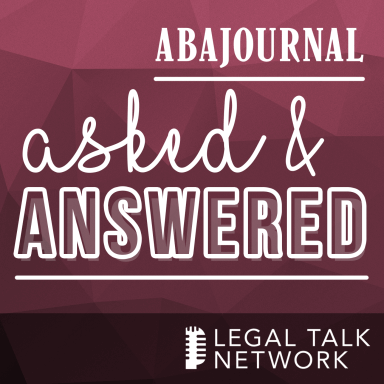 Attorney and activist Paul Harris talks about his work stretching back to the 1960s, including defending high-profile clients like Huey Newton.

How to be your own advocate without stepping on toes

This legal podcast discusses how lawyers can advocate for themselves in the workplace, without getting in their own way.

This legal podcast dives into getting certified as a minority-owned law firm for government or private-sector programs.

Are schools that fail to teach children to read violating their Constitutional rights?

In 2016, a group of lawyers filed a federal civil rights claim against the Detroit public school system. We interview Carter Phillips, one of the attorneys representing the plaintiffs.

Getting ahead while working from home

In this month's episode of Asked and Answered, Stephanie Francis Ward speaks with Sara Sutton Fell about lawyers working remotely.

How to host a networking event which actually brings in business

Event planning campaigns that won't break your budget resulting in events that lawyers will actually attend.

How can lawyers fight implicit bias?

Stephanie speaks with Jeffrey Rachlinski, a Cornell Law School professor who has done various studies about implicit bias, including one that focused on trial judges.

How to prepare for another try at the bar exam

How law students who have failed the bar exam should go about preparing to retake it - without fear or anxiety.

How lawyers can negotiate for better salaries and positions

Kathleen Kelley Reardon talks about how attorneys can ask for what they want without jeopardizing good work relationships.

The art of getting clients to pay

Tips and advice for lawyers on what you can do to recover the money you're owed.

How lawyers can bring mindfulness into their practice

Jeena Cho speaks about how practicing mindfulness, in essence living in the present moment, helps lawyers quickly move on from daily stressors and setbacks.

Is it time to leave your current job?

Gayle Victor, a Chicago-area lawyer and social worker who counsels attorneys, discusses whether you should leave your law firm.

How to build a book of business without looking desperate

Business development coach Larry Kohn discusses ways that attorneys can promote themselves and their skills, helping the lawyer and their potential clients.

Kandis Gibson has some tips and tricks for how lawyers can make exercise and outdoor activities part of your routine.

How well do people actually know their Miranda rights?

“You have the right to remain silent.” Because of TV shows and movies, most people probably know at least this part of the Miranda warning. But do people actually understand all of their Miranda rights? Fifty years after the landmark decision in Miranda v. Arizona, we speak to Russell Covey of Georgia State University State’s College...

Want to stop bias in the workplace? Here are some constructive tips

Can you plan to prevent workplace bias before it starts? In some cases yes, says Joan Williams, the founding director of the Center for WorkLife Law at University of California Hastings. The ABA Journal’s Stephanie Francis Ward discusses with Williams tips on how to create what she calls “bias interrupters” to head off potential discrimination.

How artificial intelligence is changing the way lawyers practice law

Artificial intelligence has long been a tool for lawyers to perform their tasks more efficiently. However, the technology has advanced to the point where computers can now perform many of the tasks that were once the exclusive domain of humans. In this month’s Asked and Answered, the ABA Journal’s Victor Li talks to freelance writer...

Cost savings are particularly important for small firms and solos. What are some easy fixes for making law firm budgets go further, and what are some common mistakes to avoid? In this month’s Asked and Answered, the ABA Journal’s Stephanie Francis Ward gets some tips and tricks for stretching firm’s dollars further. Mrs. Natalie R. Kelly is the Director of the State Bar of...

How can you attract positive media attention for yourself or your clients?

You may have noticed that some lawyers are often quoted in the press. They might have a practice that naturally garners attention, or perhaps they are great at explaining complex issues succinctly and have a good camera presence. Or it could just be that they’re known for returning phone calls and emails in a timely...

How can you make and keep reasonable resolutions for your career?

It’s time to set goals for the new year. But can you actually follow through with them? In this month’s Asked and Answered, the ABA Journal’s Stephanie Francis Ward discusses what reasonable steps you can take in 2016 to improve your life and your career. Her guest Karen Kaplowitz gives listeners tips on making and...

Can a commitment to blogging help develop a practice area and turn you into an expert? In this month’s Asked and Answered, the ABA Journal’s Stephanie Francis Ward speaks with Hilary Bricken, a Seattle lawyer and one of the authors of Canna Law Blog. Recently honored as one of the ABA Journal’s 9th Annual Blawg...

What can lawyers do to manage and conquer anxiety?

Are lawyers prone to anxiety, or is the pace of the profession the culprit? The ABA Journal’s Stephanie Francis Ward speaks with Will Meyerhofer, a psychotherapist who has also been a practicing attorney, to learn more about anxiety and get tips on how lawyers can manage and overcome it.

Which practice areas are going to be the most lucrative in the future?

The market for legal jobs may be getting better, but it’s still not great. That being said, are there specific practice areas that need more attorneys to serve current and future needs? In this month’s episode of Asked and Answered, the ABA Journal’s Stephanie Francis Ward speaks with legal search consultant Valerie Fontaine to find...

What good can some men serving life sentence do for other inmates? A great deal, says Judge Laurie A. White, who co-founded a re-entry program for inmates of the infamous Angola State Penitentiary in Louisiana. In this episode of Asked and Answered, she tells the ABA Journal’s Stephanie Francis Ward about how the program utilizes...

How to conquer anxiety and break the ice during professional events

Do you get social anxiety thinking about networking at big events? Is it hard to make connections with other lawyers? Focus on what you can learn about others, rather than telling people about yourself, business development coach Larry Kohn tells the ABA Journal’s Stephanie Francis Ward. Larry Kohn, an executive coach, is president of Los...

How can lawyers maximize relaxation while on vacation?

We’d all love to be able to unplug completely while we’re on vacation, but for many lawyers it’s not that simple. Meeting your duty to your clients might mean that you can’t just leave your phone at home. But how can you keep distractions to a minimum and make the most out of your time...

Cannabis businesses need lawyers, but how can you build a marijuana practice?

So you want to practice overseas?

Have you ever daydreamed about having a career abroad? Before saying “bon voyage,” you should know what’s involved. In this month’s Asked and Answered podcast, moderator Stephanie Francis Ward will find out tips and advice on developing a practice beyond U.S. borders.

Would your practice be prepared if something happened to you? These tips can give you peace of mind.

If the unthinkable happens, will your practice be ready for an intermediary to take over or help with a transition?  Do you know what would happen if you–or one of your colleagues–should suddenly die or become incapacitated? The ABA Journal’s Stephanie Francis Ward speaks with two experts about tools and systems you can put in...

How can attorneys get help without harming their careers?

With such a stressful profession, many attorneys face addiction and other mental health issues. If you find yourself struggling–or know another lawyer who is–what resources are out there? Does admitting a problem have to harm your career? What are your ethical duties if you do know that a colleague is battling an addiction or suffering...

In the wake of divorce, many families find themselves emotionally and financially devastated. If you’re in the heat of a legal battle, it’s easy to go to far and create acrimony with your ex-spouse which can poison any chance at a cordial future relationship–and drain both sides’ bank accounts to pay for attorney fees. But...

In this month’s Asked and Answered podcast, moderator Stephanie Francis Ward talks to Linda Greenhouse and Jonathan Turley about the past, present and future of legal journalism, and how it has influenced courts. Greenhouse reported on the U.S. Supreme Court for the New York Times for four decades, and is now the Joseph Goldstein Lecturer...

Social media is an easy (and often free) tool that litigators can use to share their clients’ stories. But how much is too much, and what if you post something that you’ll regret later? In this month’s Asked & Answered podcast, we speak with Anthony C. Johnson, a plaintiffs personal injury lawyer who previously owned...

How to Network Without Feeling Slimy

Lawyers are often told how important professional networking is. But many find it so uncomfortable they feel physically dirty. Why is professional networking so distressing to so many? And how can you overcome it and be successful? In this month’s Asked and Answered podcast, we speak to Tiziana Casciaro, one of the authors of a...

Do you have what it takes to be a rural lawyer?

Many young law grads are being urged to move out of large cities and into rural areas, where there aren’t as many attorneys competing for work. As we reported in the ABA Journal’s October cover story, there are many small communities in rural America that are woefully underserved, and access to justice is a real problem....

How do you provide client hand-holding if you run a virtual firm? (podcast)

This month, in connection with our Legal Rebels project, we wanted to look at the growing field of virtual law practices. Opportunities are growing for lawyers to practice law in digital spaces. But clients still want and need individual attention. If you have a virtual law practice, how can you provide the hand-holding necessary for...

How do we fix the school-to-prison pipeline? (podcast with transcript)

Zero tolerance discipline policies were once all the rage in schools. But instead of improving test scores and graduation rates, zero tolerance policies were shown to actually reduce them, says Daniel Losen, director of the Civil Rights Project’s Center for Civil Rights Remedies. Research also showed that in practice, many children—especially children of color and...

Language is a living thing. New words and phrases—or even grammatical shifts—mean that a lexicographer’s work is never truly complete. This month, we’re speaking with Bryan A. Garner, the editor-in-chief of Black’s Law Dictionary, president of LawProse Inc. and author of the ABA Journal column Bryan Garner on Words. He’ll share with us what goes...

How to deal with high-conflict clients (podcast with transcript)

For some clients, it seems like no matter what facts you present them with, you just can’t make them see the reality of their situation. They want to battle every step of the way to “have their day in court,” even when it’s not in their best interest. ABA Journal reporter Stephanie Francis Ward speaks...

Great trial lawyers should be great storytellers. But how do you remember everything you need to, and look confident while doing it? To find out, we spoke with Billy Martin, who is a high-profile Washington, D.C., lawyer and the veteran of more than 150 jury trials. Notecards should be used as props, not crutches, he... Stephanie Francis Ward, a legal affairs writer, joined the ABA Journal staff in 2001. Stephanie had worked as a...

#311: What You Should’ve Learned in Law School, with Neil Tyra