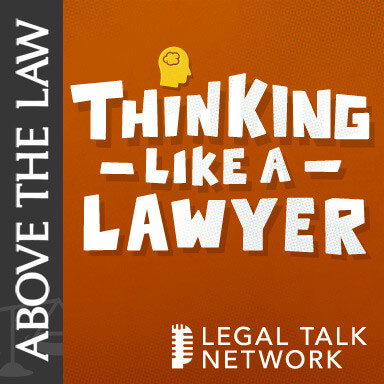 Joe is left solo to make a few announcements about upcoming opportunities with the Above the Law team.

As everyone departed for the holiday, Joe was left solo to make a few announcements about upcoming opportunities to see the Above the Law team, including an invite to our upcoming holiday party for all the loyal readers and listeners.

Intro Welcome to Thinking Like a Lawyer with your hosts Elie Mystal and Joe Patrice, talking about legal news and pop culture, all while thinking like a lawyer, here on Legal Talk Network.

Joe Patrice: Hello. Welcome to another edition of Thinking Like a Lawyer.

Yes, yes, thank you. As you know, I’m Joe Patrice from Above the Law. I do not have a co-host today. He’s unable to join us and I also don’t have a guest today because they are unable to join us, and part of the reason I think is that this is the week of Thanksgiving that we’re recording this and they probably didn’t think through when they scheduled this that they didn’t want to be here.

But, I intrepid as I am — I am here and I just want to give a short recap on what’s going on so that you’re kept aware, this won’t be a full episode obviously because we have not very much to talk about, but I wanted to still reach out and chat with you all about fun things going on.

First of all, I wanted to chat with you about a couple of plugs, so you know what’s going on in the near future.

First of all, on December 4th, it is E-Discovery Day. If you are not familiar with E-Discovery Day, I mean, I really don’t know what you’ve been doing out there. It’s a holiday that has been created from our friends at Exterro to celebrate the day that the new federal rules came in that finally took a serious look and then how to deal with E-Discovery. And so, they mark that occasion with a series of webinars and professional meet-ups in various markets for people who are in the business whether they are lawyers or the in-house crew who deals with E-Discovery or vendors whoever. They are all able to get together and learn a little bit more about what’s going on, trends, how to do best practices et cetera for E-Discovery.

And, if you are interested in that, you should go check out the E-Discovery Day’s website and especially check out the top legal stories, webinar that will be coming, I think it’s between two and three maybe, I can’t verify off the top of my head on December 4th, and that will be me actually chatting with some folks from Zach Warren from Legaltech News and someone I think it’s changing who the person is, but someone from Bloomberg Law about the top legal discovery stories of the year.

So, that’s a fun one where we — we’ve done it a few times, we kind of lay back and chat about the things, good, bad and indifferent that have gone on with the E-Discovery world over the last year.

Also, if you happen to be in New York either because you’re based here or visiting in the near future, you should come join Elie and I as well as the other Above the Law staff, because we’re going to have a holiday party that’s open to everyone, so you should definitely swing by. Details will be on the site, theoretically you all read Above the Law or else thank you for joining us on Thinking Like a Lawyer without that because we assumed everybody was the same, but now you should read Above the Law and you’ll see details of the coming days of the party, but I’ll say right now we’re going to do it on December 13th, which is a Thursday. It’s going to be a 7:30 p.m. at a Bar in Midtown called Windfalls.

So, check it out with the site, register through there, and hopefully, we’ll get to chat with some of you in person. It’s a good way to see other people who are in the biz and like-minded as in they enjoy the kind of voice that Above the Law brings as well as an opportunity to take a break from your finals studying if you are in law school. You may not feel like you want to take a break, but you can slack off for a couple hours to grab some drinks with some people who will tell you that you’re going to get through it. With that, that’s December 13th at 7:30 at Windfall.

So, what else is going on? Is there any news? There sure is. If you have not been paying attention to what’s going on out there, Big Law bonus season has begun. It has kicked off with Cravath coming in slightly before Thanksgiving, which is the traditional time for announcing bonuses, but it’s not the time that’s been most recent, most recently people have been waiting until after Thanksgiving to announce bonuses, but historically it was right before Thanksgiving, and this year Cravath has returned to form and is leading the cycle by announcing that they will be giving out bonuses that are exactly equal to what they gave out last year.

So, that’s a trend sign that the market feels just as comfortable as they did last year, but they don’t want to push it.

That said, we need to bear in mind that there were mid-year bonuses, which is not a common occurrence, so there was mid-year bonuses and raise this year for cost of living. So, it’s been a pretty good year for Big Law associates.

Cravath has come out, there have been a handful of firms that have followed but we expect to see more-and-more over the coming days. This is a reminder, if you receive a bonus announcement at your firm, the first thing you should do is send that along. You will be anonymous. We don’t out who sends them to us, but send along either a screencap of it or the memo itself to [email protected] and we will get on that.

We cover this industry pretty closely but we’re also a handful of people and we need the help of tipsters out there, like you, to let us know when these bonuses get announced, and if your firm is slacking on bonuses, you need to let us know that too. Tell us that you haven’t heard anything that people are upset, that associates are restless, all this information is valuable to us and we will get the message out there.

And finally, I guess, the last thing that I’ll talk about today is a story that we worked on at Above the Law, it’s actually not been published as of the time I’m saying these words right now, but it will be then.

Matthew Whitaker, the acting Attorney General as he currently styles himself, the Department of Justice career people have expressed that they are not particularly enamored with this choice of someone to lead the department even if it’s only on an interim basis, and what we have now is we have access to his job application that he wrote a handful of years ago. He wrote eight years ago a job application for a seat on a State Supreme Court and it is a doozy. If you have not read it you should check it out on Above the Law, because it’s riddled with somewhat embarrassing, very desperate, always laughable man, and just typos too, it’s so bad.

Anyway, so, that’s the other big story I would encourage everyone to check out, and with that I think I myself, I’m going to start the process of shoving off for the holidays.

Thanks for stopping by and listening to us even on this holiday week recorded episode, which is obviously shorter. Next week we will be having a conversation with some folks from LexisNexis, which I think is a company you all are well aware of about what they’re up to and we will have a full episode, theoretically we’ll have Elie back from his current exile, which I believe is have it something to do with his car. Well, I’m sure that will be something we’ll hear about when he grinds his gears.

Be sure to subscribe to the show, be sure to give it reviews that all helps, follow Above the Law, read it all the time, especially if you have information about bonuses to give us. Follow me at @JosephPatrice on Twitter. You can follow Elie @ElieNYC on Twitter. Listen to all of the offerings from the Legal Talk Network’s family of podcasts as well as Book of Business and The Jabot to Above the Law-related podcasts that are out there.

And with that, we will shove off. Happy holidays, although you will be listening to this right after the Thanksgiving holidays ended, and we’ll see you later, maybe in-person, if you come to that party. Cool. Bye.

Outro: If you would like more information about what you heard today, please visit legaltalknetwork.com. You can also find us at abovethelaw.com, atlredline.com, iTunes, RSS, Twitter, and Facebook.

The views expressed by the participants of this program are their own and do not represent the views of, nor are they endorsed by Legal Talk Network, its officers, directors, employees, agents, representatives, shareholders, and subsidiaries. None of the content should be considered legal advice. As always, consult a lawyer.

Above the Law's Joe Patrice and Kathryn Rubino examine everyday topics through the prism of a legal framework.

Biglaw Closes Out The Year With Some Shenanigans