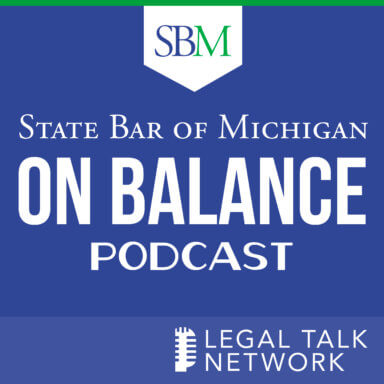 ABC’s Dan Abrams discusses the tension between lawyers and the media, finding unbiased jurors, and how this tension affected the Casey Anthony case. Dan Abrams is an American web entrepreneur and television presenter who serves as the chief legal affairs... JoAnn Hathaway is a practice management advisor for the State Bar of Michigan.  She previously worked as... Tish Vincent retired as the Director of Michigan’s LJAP. She is now the Chair of the ABA...

Lawyers and the media may not be enemies, but they’re certainly not friends. In this episode of On Balance, hosts JoAnn Hathaway and Tish Vincent talk to ABC’s Dan Abrams about the tension between lawyers and the media. In their discussion, they cover the effect of social media on a trial, finding unbiased jurors, and how this tension affected the Casey Anthony case.

Dan Abrams is a web entrepreneur and television presenter who serves as the chief legal affairs anchor for ABC News and as the host of both 60 Days In and Live PD on the A&E cable network.

Intro: Welcome to State Bar of Michigan’s On Balance Podcast, where we talk about practice management and lawyer wellness for a thriving law practice with your hosts JoAnn Hathaway and Tish Vincent, here on Legal Talk Network.

Take it away ladies.

Tish Vincent: And this is Tish Vincent, the Program Administrator for the Lawyers & Judges Assistance Program at the State Bar of Michigan. We are recording today’s show at the NEXT Conference in Detroit, Michigan.

JoAnn Hathaway: Joining us now we have Dan Abrams. Welcome to the show Dan.

Dan Abrams: Great to be with you.

Tish Vincent: Before we get started, please tell us a little bit more about yourself, where do you work and what do you do?

Dan Abrams: I work at ABC News. I work at A&E. I run a digital media company, so I do a lot of different things.

JoAnn Hathaway: Well, thank you for joining us today. We are here to discuss the highlights of your keynote speech that you just gave here at the NEXT Conference in Detroit at Cobo. Can you give us some highlights and start by telling us what you think those listeners who weren’t here to attend today would like to know.

Dan Abrams: Well, I think the focus of my keynote was on the tension that sometimes exists between lawyers and the media. And talking about where I think that the lawyers have a fair gripe and other times where I think that the media has a fair gripe, and what I think is the bigger problems with the media sometimes, what I think the problems are with lawyers sometimes, and kind of looking at it from the perspective of someone who is a proud member of two of the least popular communities in America.

Tish Vincent: So a member of the media and also an attorney yourself you notice the tension that is increased you would say in today’s media world coverage of the legal profession?

Dan Abrams: I think that there’s a tension for just about every industry when it comes to media, which is, there used to be a sense of there’s nothing we can do about it, when people disagreed with media coverage. And now with the advent of social media, people can express their own views on what they think of the media, and consequently, I think that the criticisms that the media has endured on a national scale also exist on industry scales as well.

And so I think you see people in the legal community and in other communities going after the media; sometimes, in my view, fairly, sometimes unfairly because everyone has a voice now and everyone has the opportunity to be a media company.

Tish Vincent: Yes, everybody can think that their opinion is an expert opinion it seems on social media sometimes.

So look, I think it’s — I think on the whole having so many more people weighing in is a good thing, but there’s also the danger that you minimize the expertise of the people who studied it, spent their lives doing it, et cetera.

Tish Vincent: Yes. You were speaking in your keynote about some of the really well-known cases, like the Casey Anthony case and the one with the NLRB and that it affects not only the attorneys, but the judges at times, did I hear that correctly?

Dan Abrams: Well, my point about the judges was just that judges I think are under enormous pressure when someone is either found guilty or pleads guilty to give tough sentences. That once someone is convicted, the public doesn’t want to see a light sentence and that when people say to me this person is getting off because they are a celebrity; actually I find it’s just the opposite, which is that celebrities once they are convicted end up getting tougher sentences.

JoAnn Hathaway: Do you think it’s difficult though now to find unbiased jurors because social media and media in general is everywhere?

JoAnn Hathaway: Now, Tish mentioned that during your keynote this morning you had talked about the Casey Anthony trial. In general, can you share a little bit more with our listeners today what you had to share about that trial?

Tish Vincent: One of the questions I heard you being asked as I walked out of the room was how can a person find an unbiased news source, but I didn’t get a chance to hear your answer.

Dan Abrams: The answer was they have to watch me.

Dan Abrams: Yeah, yeah. No, the reality is that I sort of, and I admitted that I kind of punted on that question, because bias is in the eye of the beholder. And so if I answer the question what do I think is the most unbiased news source, really what I am just saying is through my own personal lens.

I tend to like the fact checkers is what I said. I said I like the PolitiFacts of the world. I like to be able to know what people are saying, if it’s true or not, and judge then whether I want to believe them based on how accurate that person or entity is. But boy, bias in the media is such a hot topic right now and it’s a fair one to discuss, because as I say, there is no such thing as pure objectivity, but I can tell you that I think that the mainstream media organizations try harder than people know to try to be fair. It doesn’t mean that they succeed at all times, but it does mean there’s a concerted effort.

JoAnn Hathaway: Yes, it’s a difficult thing to do in this world we are living in now. You can’t really be bias free, I guess.

Tish Vincent: Any other things in general Dan that you feel would be important for our listeners?

Dan Abrams: No, I think it was fun being here; seemed like a really smart group and a good group and I hadn’t been back in Michigan. I think I spent a lot of time here during the various trials of Jack Kevorkian.

Dan Abrams: Back in the day.

Dan Abrams: I was here for I mean — and as you will recall, there were a lot of trials.

Dan Abrams: Yeah. So I kept coming back again and again here to Michigan and really enjoyed being here, and it’s been a while since I have been back here, so it’s nice to be back.

Tish Vincent: Well, we are so glad that you could join. It looks like we have reached the end of our program. I want to thank our guest today Dan Abrams.

JoAnn Hathaway: So Dan, if our listeners have questions or wish to follow-up with you, how can they reach you?

Dan Abrams: Yeah, I am on Twitter @danabrams. I am on Facebook under Dan Abrams as well. And I hope that they certainly can read my various websites and love getting comments on those sites.

JoAnn Hathaway: Great. This has been another edition of the State Bar of Michigan: On Balance Podcast. I Am JoAnn Hathaway.

Tish Vincent: And I Am Tish Vincent. Until next time, thank you for listening.

The views expressed by the participants of this program are their own and do not represent the views of, nor are they endorsed by Legal Talk Network or the State Bar of Michigan or their respective officers, directors, employees, agents, representatives, shareholders, and subsidiaries. None of the content should be considered legal advice. As always, consult a lawyer.

The State Bar of Michigan podcast series focuses on the need for interplay between practice management and lawyer-wellness for a thriving law practice.

Backups For Your Law Firm – Recovering from Human Error, Disasters, Hackers, and More

What You Need to Know About Trauma-Informed Lawyering