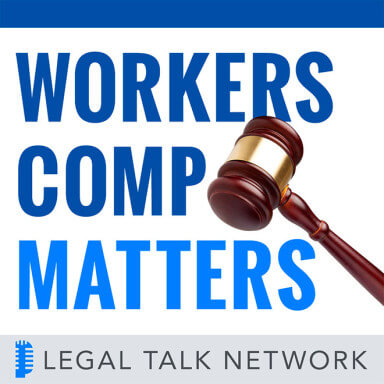 Michael Galpern is the Co-Managing Partner and Chairman of the Wage and Hour department of the Locks... Alan S. Pierce has served as chairperson of the American Bar Association Worker’s Compensation Section and the...

The Fair Labor Standards Act (FLSA) is often overlooked as a part of workers’ compensation because it does not involve injury. The FLSA was a job creation bill passed in the 1930s that requires all employers in the United States to pay employees time-and-a-half, or 1.5 times their normal rate applied to every hour worked in overtime. As probably every worker knows, overtime starts after 40 hours of work per week. This is a federal statute that applies in every state to every worker, although 29 states have their own Wage and Hour laws. Who is exempt from the FLSA, how is this law enforced, and what related issues arise?

In this episode of Workers Comp Matters, host Alan Pierce interviews Michael Galpern, a workers’ compensation lawyer who specializes in the Wage and Hour area of the law. Together they discuss the importance of the FLSA, what types of managerial positions are exempt from the law, and how the Departments of Labor enforce the law. Galpern explains the issues that arise with tipped employees and cash methods of compensation. If an employee has suffered an infraction or violation of the FLSA, he urges them to find a lawyer. The attorney will know what questions to ask of the employer and what documents to require for discovery. Furthermore, the defendant must pay for the attorney if the case is ruled in favor of the plaintiff. Galpern gives an example of a case, Stillman versus Staples, in which Staples had classified many of their assistant managers as managers and claimed them exempt from the FLSA. Tune in to hear the exciting verdict. Overall, Galpern emphasizes that every job in the United States is covered under the FLSA; some jobs may be covered and exempted, but all are initially covered.

Michael Galpern is the Co-Managing Partner and Chairman of the Wage and Hour department of the Locks Law Firm in Cherry Hill, New Jersey. Galpern is also the new president of the Workers Injury Law and Advocacy Group (WILG) and the past president of the New Jersey Association for Justice. Galpern has also been an invited lecturer on numerous occasions, speaking on subjects related to civil litigation and complex torts.

Special thanks to our sponsor, PInow.

Workers' Comp Matters encompasses all aspects of workers' compensation from cases and benefits to recovery.

A Playbook for Tackling Workers’ Comp in Professional Sports

Workers’ Comp Medical Fee Schedules: What You Need To Know