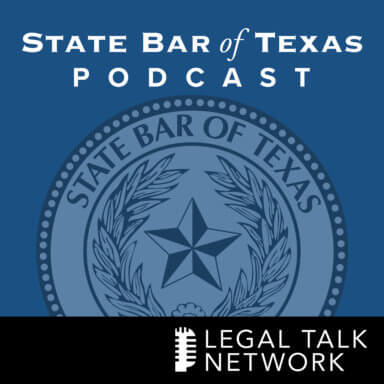 Learn what's coming up in the State Bar of Texas Podcast, a relaunched explorative and engaging show featuring legal trends and analysis, current events, and stories, and accounts that affect all of... Welcome to the newly relaunched State Bar of Texas Podcast, in which we traverse the law, legal trends and analysis, current events, and stories, and accounts that affect all of us, lawyers and non-lawyers alike. In this podcast, host Rocky Dhir, attorney and CEO of Dallas-based Atlas Legal Research, will talk to thought leaders and innovators about their insight and knowledge on what matters to practitioners. Tune in to learn more about this explorative and engaging new legal podcast.

Rocky Dhir: Hi. This is Rocky Dhir coming to you with some exciting news. You and I are about to embark on some excellent explorations together. Why? Because the State Bar of Texas is re-launching the State Bar of Texas podcast. I’ll be your host as we traverse the law, legal trends and analysis, current events and stories and accounts that affect all of us; lawyers and non-lawyers alike.

On behalf of the State Bar of Texas, I’m honored to invite you to connect with us by subscribing on Apple Podcasts, Google Play or your favorite podcast app.

Also, you can learn more about our production at legaltalknetwork.com. Tell your friends, tell your family, and tell your colleagues to listen too.

Stay tuned for Episode #1, in which I interview Anthony Graves, who was wrongfully convicted and spent nearly two decades behind bars, including 12 years on death row in Texas, before finally being exonerated and released in 2010.

Here’s a short clip from our conversation together.

Anthony Graves: That caused me to lose my freedom.

Rocky Dhir: Now, you mentioned earlier that you were — you sat in jail for about two years, so you were convicted in 1994 and then sentenced to death row.

Rocky Dhir: When you were awaiting trial and when the investigation was taking place there was a District Attorney named Charles Sebesta and the lead Texas Ranger on the case, Ray Coffman. When you talked to them, when they questioned you about this particular case or your involvement in it, I’m assuming, you told him you were innocent, you were able to give him names of people that could vouch for your whereabouts, what happened with all that, why would they pinpoint you?

Anthony Graves: Listen, man, let’s describe who I am at that time. I’m a young Black man with not many resources, okay? I am not the young Black man just lied on me and said that I was involved in a crime that drives the highest emotion. It’s a recipe for success for a District Attorney who wants to just seek a conviction. All you have to do is get someone in there with no resources, that looks like me, 02:01. That’s exactly what happened with me, because there was no reason for them to pursue me the way they did when they had all the evidence that suggested that I was indeed innocent.

As a matter of fact, we found out 10 years later that Mr. Carter, who initially lied on me, the same night told him that he lied and that I was innocent. They never divulge that information to us. They just went on and pursued the case and set me in jail for like two-and-a-half years trying to build a case on me out of thin air.

So, it was just bad judgment. I think it was very intentional because they didn’t think anyone would question their integrity around such a high-profile case. That’s a big problem for our system, there are not many checks and balances when it comes to district attorneys and our law enforcement, and at least our citizens and our people vulnerable 02:54 out here. I was vulnerable to a system that decided that they wanted to convict me of a crime I didn’t commit.

Rocky Dhir: Now, eventually when you went to trial —

I hope you enjoyed that little preview. To hear all of Anthony’s story, be sure to check out Episode #1.

After all, life is a journey, folks. Tune in.

The State Bar of Texas Podcast invites thought leaders and innovators to share their insight and knowledge on what matters to legal professionals.

Highlights from the State Bar of Texas’ 2022 Year in Review

What The Rest of Us Need to Know About Bankruptcy Practice