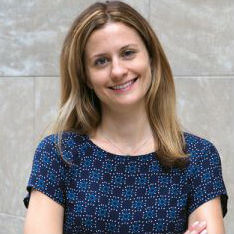 Jessica Bednarz is the Director of Innovation & Training for the CBF’s Justice Entrepreneurs Project (JEP). Jessica helps JEP lawyers chart new paths in the practice that make their services more accessible and affordable for the public. She develops and manages the JEP curriculum and associated resources to help JEP lawyers fulfill this mission, identifies and documents replicable models that have proven successful, and directs special projects to advance innovation in the practice of law.

Prior to serving in this role, Jessica was the Program Manager for the CBF. In that role, she coordinated the CBF’s legislative and policy advocacy work, served as primary staff for the CBF Young Professionals Board, managed the day-to-day operations of the CBF Legal Aid Academy and the CBF Pro Bono Support Program, and worked on a number of JEP projects.

Prior to working at the CBF, Jessica was in private practice specializing in family law, both as a solo practitioner and as an associate at O’Connor Family Law, P.C. She later served as the MCLE Coordinator for The Chicago Bar Association.

Jessica served as a CASA (Court Appointed Special Advocate) for four years, regularly volunteered at a local legal aid advice clinic, and served on the Young Professionals Board for the Legal Aid Society. She currently serves on the Board of Directors for Utah Peoples’ Legal Services.

Jessica is originally from Fishers, Indiana and graduated from Indiana University with a Bachelor of Science Degree in Business. She remains an avid Hoosiers basketball fan.